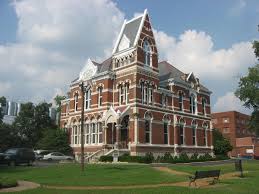 Willard Library is the oldest public library in Indiana and has been operational since 1885.  It was built by a local industrialist by the name of Willard Carpenter and was an architectural marvel at that time.  It is designed in the Victorian Gothic style and truly is a sight to behold.

The library has become quite famous for a unique and somewhat puzzling reason.  Many believe that a ghost inhabits the building who is referred to as The Grey Lady.  Because of this, the library has been featured on the Ghost Hunters television show and the Discovery Channel.  Learn more.

Next up: Angel Mounds